I woke up today and the markets were red. I didn't actually know what hell was happening but that didn't stop me from trying to find out. To be honest, i couldn't find what was going on exactly, but i managed to find 3 different stories.

Maybe it's one of them, some of them, all of them, or something else entirely that led the markets to fall, who knows. The first that i heard was the crypto ban in Turkey, something i still don't believe has the power to drop the markets that low.

The next thing that i discovered is that there are rumors of a possible harsh attack on crypto due to money laundering something that is already happening in bulk with fiat but that's another story.

The final i found out was that 40% of the hash rate power was down or "missing" for some hours due to a big blackout in some areas of China. That's the most likely thing to have happened in my opinon but another thing that is very likely is that all of the above combined led to that dump.

The reason that i say that is because you can just dump BTC 14% with rumors or with a single country banning it (they didn't ban this completely), except if that country is America. Something bigger must have happened.

Also, that power outrage proves that even though bitcoin is decentralized the mining of it isn't. Also, it is more likely that people sold their coins when they heard about the outrage and then many more followed because of panic as usual and not because of the actual hash rate issue.

Now, why am i saying that it's a good opportunity to buy see this below? 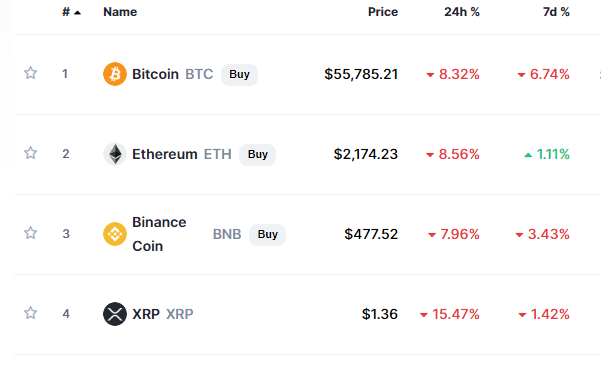 The main reason is that there is no actual big problem ahead of us so i believe that the prices eventually will climb up again to 60-62k for btc 2400 for eth, 600 for bnb etc etc. So why not have a 10%+ profit along the way?

Also, as i have stated numerous times many big players are involved, big players like funds, millionaires, billionaires, governments. All these people won't just sit there and watch while their money fly away. They are in for good and they are in because this crypto world has tons of profits.

In other words, don't be afraid because a lot of money has already been spent on cryptos and many big players are in the game. I would suggest to all of you to buy if you can and want to, ofc making your own research first and if you listen to my advice, that isn't financial but just a friendly one and win some, give me a little something :P

What Do You Think?

Why some People Prefer Stocks over Crypto: A talk with a Friend

What the hell is Happening with Dogecoin?

Hive is a Long-Term Project

Congratulations @filotasriza3! You have completed the following achievement on the Hive blockchain and have been rewarded with new badge(s) :