Saving the Moon, Mars & Donuts? | Taxes, Yield & Trusting these projects (or not?) 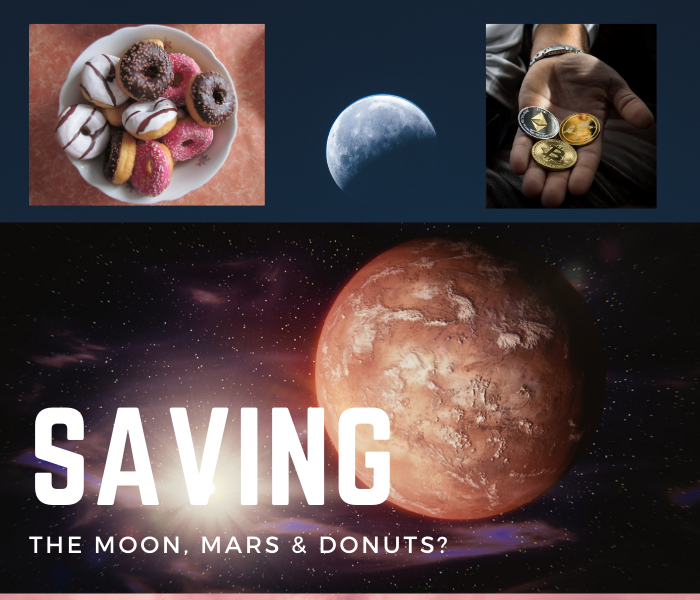 On my earlier one about having the Munchies I'd like to share my experience so far regarding Munchtoken plus two other projects that I bought later that day.

All three of them apparently keep throwing coins in the wallet. I honestly thought I was going crazy after filling in the data in the portfolio, but looking at a much higher value of tokens later that day. I thought I had made a mistake, until I noticed one of the wallets changing in amount quite regularly.

A couple of days before we bought in on Munch token

My boyfriend told me about Safemars, and said this is a cheap one, check it out, as you can buy it on the Binance Smart Chain, so low fees, and maybe worth the gamble. We were looking for a new "HOT" to buy into for those cheap prices where I started buying in on Holochain once. It didn't matter much if this was going to be a great solid project, this was more with the idea of buying in on something that may or may not boom once, similar to the DOGE hype, I guess.

I thought why not, although I thought it was a bit strange looking at a roadmap that stopped Q1 2021 instead of having some more steps in the future.. But then I thought oh well for a price with that many 0's behind the . it could potentially work out nicely in the end, it's a gamble but let's have some fun. Ideally, I could use some funds on the BSC and went to the exchange page on Cubdefi. I filled in an amount (for a few bucks only) and got an error every attempt. I didn't know this error yet (it also occurred to me when I bought Munch on Uniswap so now I know that it was probably the slippage % which needed to be higher). After a few attempts, I didn't trust the error and decided that it wasn't the right moment to safe Mars ;) and left it for what it was.

Fast forward a couple of days

I actually forgot about Safemars, until @hetty-rowan mentioned $SAFEMOON a couple of days later and I was confused as I thought we were talking about the same coin. Both Safemars & Safemoon are available on the BSC and still very cheap. I have to admit, that with both of these projects, I wasn't really interested in doing research but just wanted to buy a bag and maybe forget about it for a long time, as in you win some and you lose some, let's hope for a big win here...

I decided I'd buy in on both projects that day

I didn't spent more than a few bucks each at first, as I wanted to see some price movement first. Not long after, I noticed the amount going up quite quickly and wondered if we won a giveaway or something (as those were on Twitter). This made us look into the docs and apparently all three of the projects give a percentage of the fee back to the holders. That's great, isn't it?

Looking at the gas part, safemoon and mars are appealing for low buy-ins, but also have higher TAX when you want to move them / sell them.
On the other had, the yield part is quite interesting, especially the safemoon 5% yield.
Does this weigh up to the fact that there's nothing to be found about the team? For a small buy-in, why not? Just be alert and cautious, and don't invest more than you're willing to lose (as always).

After 2,5 day, there is already another 15 million of $MUNCH added to the wallet thanks to the 2% yield. I mean 15 million of them, that's awesome isn't it?
I like to think that this will come in handy once we want to sell, as we have received quite a few extra Munchies for free.

When the comments started to appear about these projects being scams/rug pull projects, I honestly only thought, well in that case I was right about Mars and Moon in the first place. I regret buying a small extra bag the second day of Safemars, but it was not a huge one, so nothing to worry about IF it gets pulled. But of course, I prefer to make at least a small profit.

I was honestly expecting both projects to be in the RED RED today, but it seems they are still here and I'm going to see how it evolves.

I have a bit more faith in Munch honestly, and I would still like to believe that it's a nice project. Maybe I shouldn't, but I choose to not write them off already. Crypto is a bumpy ride, and I've learned to develop some diamond paws since $CUB was released, slowly I'm getting the hang of HODLing and I would like to give this a real shot for now.

Any thoughts of your own about these projects? Feel free to leave a comment!

As you know, I bought myself a few bags too of these projects. I honestly don't know what is going to happen. Will we get rugged? Somehow I don't want to believe that. But if so, too bad. I had only bought 10$ worth of tokens from each. Only Munch, the one that I didn't want to buy through the Uniswap because of the fees ... well, I regret buying that one through coinsbit. Not only did I pay far too much for it ... but I don't get free munchies either.

About the following up ... Hmmm, let's say that I'm going to forget about this for a while. Developing diamond paws and see if I'm going to wake up being a billionaire one day. Preferably in the not so distant future.

I think forgetting about it for a while would be best, especially looking at the bloody streets today.. what a way to wake up. But honestly, I will check it constantly anyway haha. So happy that at least $CUB will keep farming so in the end, still some got earned today :)

Congratulations @thisismylife! You have completed the following achievement on the Hive blockchain and have been rewarded with new badge(s) :