travelcontest in PHOTOGRAPHY [DAC] • 2 months ago

Hi, lovers of travel and photography!

You are kindly invited to take part in edition #5 of TRAVEL CONTEST and the theme today is "Positive Emotions" :)

Feel free to interpret the theme in every way you like, I hope to inspire more people to join this edition of the contest!

Scroll down please, to check the winners announcement!

Here are our winners and honorable mentioned today:

Let me first admit it was very hard to select the winner! I loved all the entries! I'm going to send you shortly 1 HBI share each! thank you very much !

Thanks, it's very much appreciated

Moving on to another contest!!

I still think you made a wise choice to bring your contest back to life. And you know how I feel about Positive Energy, so this contest's theme "Positive Emotions" fits wonderfully with my #thoughtfuldailypost movement. You sponsored 7 wonderful people with some HBI via @steembasicincome... so on behalf of me, and my community, I am tipping you 8 HIVE to help sponsor your next winners! We gotta stick together, and I think everyone is enjoying sharing their photographs!

Thanks for the support!^^
!LUV

Huge thank you for the generous support and the great tip! This translates into more contestants being rewarded! :)

Many thanks for considering my work and congrats to the other contestants.

Here is my contribution to the contest of Positive Emotions:

On the Mediterranean coast of Spain and in the Balearic Islands, the night of San Joan (St. John's eve) is celebrated as the beginning of the summer solstice. It is traditional for people to jump over nine small bonfires to make a wish and burn bad omens.

All the images I publish are made by me.
DO NOT USE this image without my written permission.
Thanks for stopping by and taking a look. this is supercool picture :).

All the best to the upcoming participants

Aww, thank you! :) I'm honoured. Congrats to all the participants!

Here is my entry for the positive emotions.
While I was in Kenya, I had to visit the Sheldrick wildlife trust.
This organisation looks after orphan elephants whose mothers had been killed by poachers 😔
Elephants are my favourite animal so I was so happy to see these baby's given a second chance at life😊
We arrived just as the elephant orphans were coming back to thier stables for breackfast. It was so good to watch them drinking from a bottle 😊 Taken during my visit to the Bedouin Villages located in the southern part of Israel.
Seems like these need some good-natured attention, which is lacking during daily routine. Do you remember yourself when you were a kid? Kids don't need a reason to smile and to be happy. Kids get inspired by very simple things. Kids believe in magic, kids trust everyone. And sometimes I want to go back to my childhood, I want to be a kid again.

So, a couple of months ago I have been to a Comics museum in Korea. I am not a big fan of comics, but despite it, I really enjoyed that short walk. I felt like I am a kid again.

It is a small but very creative and cool museum. Each exhibition place looks so incredible! Just look at that huge figure! It's the size of a whole room!

Some comics were really old, even older than me. Some comics reminded me about my childhood.

After visiting that museum I understood that memories of our childhood make us happy!

3 years back was one of the worst years ever. So many misfortunes came my way during that year. Due to this, I had to indulge in a wayward lifestyle. I gave up on God, started drinking a lot and a lot more that I am not proud enough to talk about here.

During this period, I didn't Care if I went to hell, more like I stopped believing that heaven and hell exists. But you would agree with me that no matter how hard you try to subdue your human conscience, sometimes it still pops up and hunts you. I didn't escape the hunt. Most times I'd argue with my conscience for hours.

CONSCIENCE: Big boy, you are now living a wayward life thinking that you are above the law.

ME: Enemy Of progress, get behind me.

CONSCIENCE: You should know that one day you will answer for all these things you are doing.

ME: That Is If such a day existed. What if when We die we just decay and that's the end of it

CONSCIENCE: What if heaven and hell actually existed. Won't it be better to just do good, if it exists you lose nothing, if it doesn't exist you still lose nothing.

To get these thoughts out of my head, I'll resort to drinking and other bad habits. Then one day I was taken to visit heaven.

That fateful day, after having a severe argument with my conscience which ended in getting drunk, i slept off without having lunch or dinner, because i slept till the next day.

While sleeping, I had a terrible dream and in that dream I was killed. It felt so real and I totally believed I died. Then I went to heaven. There I had a chat with the angels. These angels told me so many angelic parables that instilled a lot of POSITIVE EMOTIONS in me. I'd love to tell you about these parables but it was a confidential discussion.

I woke up, totally surprised to be alive. The words of the angel echoed in my head and still does till this day. From that day On ward I had a change of heart. And in no time, things began to fall in place perfectly

This is my entry for today travel contest theme : "Positive Emotions" 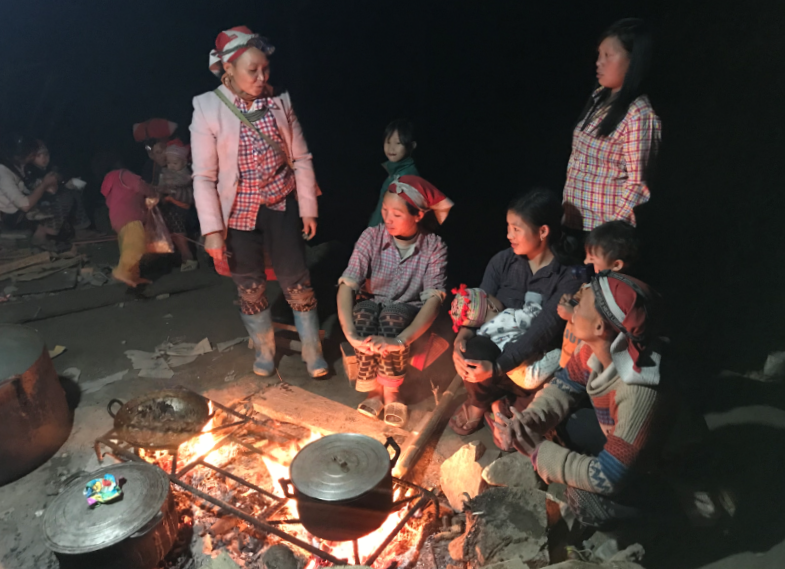 The picture was taken in one of the local village in Sapa , Vietnam . It was about 2 hours to reach this area using motorbike. The ladies were sitting together and sharing their day while waiting the food cooked.

Yeah , its time for the food :). It was a awesome dinner with all those people , i laugh a lot even though i have language barrier with them.